There’s a rebel in all of us. We want to do things our way. We don’t want to listen to what others are saying about us, asking us to do, or offering us. We want to try it out for ourselves and work on it in our own space using our own reflective, critical thinking skills. We want to come to our own conclusions, experience the results of our own actions, and make decisions based on the confidence we’ve gained through our own hard work. Our humanity makes us insular and self-centered by nature. So much of life and work is a journey of discovery on the singular path of self. It’s genuinely hard work to compromise, collaborate and lean in to serving others consistently.

An article appearing in the journals of the University of Chicago provides a simple definition of a rebel:

A rebel is a person who resists or fights against authority instead of obeying. “No!” the rebel says. “This has been going on for too long. This must change. I have my own ideas, and you must pay attention to them.”

Rebellion is often distinctly and inextricably tied to leadership. History is filled with examples of leaders who are also rebels. Here are a few examples that come to my American mind:

Recognizing the rebel on the team, in the sphere of influence, or even in one’s self is vital to developing and advancing leadership capability. As leaders, we all need to recognize the rebel, or the fighting spirit that lives and breathes within us and others. It’s what drives us to be authentic and fuels our desire to make our mark. Actualizing individual authenticity and personal uniqueness and power is a primary indicator of leadership mastery, in Strong Point’s Leadership methodology. 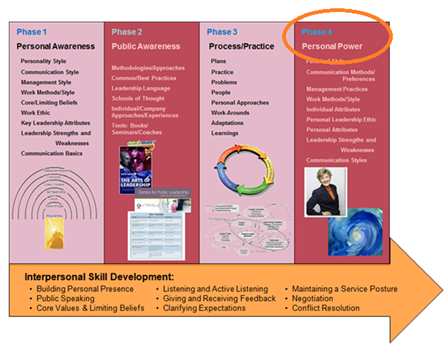 In an article in Volume 3. No.1, Article 7 of the emagazine Global Ecco https://globalecco.org/ctx-vol.-3-no.-1-article-7 called Anger or Ability: Arguing the Causes of Rebellion, by Victor Asal and Steve Sin, the authors call a prolonged grievance or complaint “grievance theory.” The authors explain that grievance theory holds, that if people are mistreated long enough and badly enough, they will eventually become rebels, and take up arms against their oppressors.

Mr. Asal and Mr. Sin also point to “greed” as a prime motivator of rebellion. They share their perspective that people need an incentive, such as the promise of reward before they rebel. In this view:

“greed is used as shorthand for all forms of motivations and incentives, from the simple desire of people to better their situation all the way to gaining material wealth and/or position.”

They go on to acknowledge that other scholars reject their grievance and greed theories, in favor of an argument based on resources and opportunity. They explain that most of us can agree that everyone has a grievance of some sort and that we all harbor within us, the motives and incentives to rebel. They point to the fact that many who study rebellion, say it’s “only those who have a reasonable shot at success who are actually going to launch a rebellion.”

Dr. Nicola Davies, a Medical and Business Writer who maintains a psychology consultancy and website called Health Psychology Consultancy, wrote an article about the rebel personality. https://healthpsychologyconsultancy.wordpress.com/2013/04/20/the-rebel-personality/. In it, she says that many, if not all rebels, are driven by a false sense of superiority or are wounded by a deep sense of powerlessness stemming from past life or childhood experiences. Dr. Davies explains that some professionals use rebellion as a coping mechanism to deal with deep insecurities.

Some biblical scholars claim that rebellion is rooted in one thing — jealousy!

Whatever your beliefs about rebellion and its root causes, it’s important to recognize the rebel, reference Strong Point’s Leadership Rule #21: Recognize the Rebel, and to understand both the positive and negative impact that rebels have on operational execution and results.

There are many positive benefits of professional rebellion. Tim Leberecht wrote an article in Fast Company, in September 2012, called How To Nurture Your Company’s Rebels and Unlock Their Innovative Might. In it he explains the strong benefit of rebels. Hint: It’s opposition!

“With a strong and self-organized in-house opposition, companies can cover the entire breadth of their corporate character. It allows them to acknowledge that they are complex and multipolar, that they have multiple truths, and that, through this tension, they can become capable of stretching themselves, expanding, and realizing their full potential. “

Tim says this applies to hiring, too. He advises looking for “change agents” (read rebels). Productively rebellious individuals are both creative and persistent in bursting a straitjacket of outdated practices and processes.

Strong Point professionals are often asked by customers exploring a Business Transformation Partnership, “How do you move people who are skeptical of and even resistant to change from a “no” stance to one of openness and active support?” Our answer, using the words of the late Stephen Covey, leadership consultant and author of The 7 Habits of Highly Effective People, is to “seek first to understand. “ This simply means that we find it critically important to understand the root causes of resistance to an essential change in ways of working. We help our clients resist the temptation to squelch the voices of naysayers by bringing them into the transformation conversation. Active and vocal dissent is an indicator of strong leadership and a healthy operating environment, and often reveals an employee’s or team’s loyalty to the organization.

Why is this so important to you?

and who else sees and suffers from these break-downs in processes or  procedures?

Does anybody else care about it?

and where does the idea fall on OTHER people’s priority list?

Are there any other initiatives or functions involved in the challenge that is outside your sphere of influence or control?

and have you worked to discuss this challenge with other cross-functional leaders  and teams?

Have you developed a business case that articulates the challenges you see?

and are you sure that this challenge is significant enough to gain leadership  attention?

Do you have a solution to the problem that you are ready to implement?

and can other departments understand the solution and the benefits gained from  it?

and have you priced and tested the proposed solution in concept or in pilot?

How much value does the solution provide?

Can you monetize the value of the solution?

and does it align with the company’s current and strategic goals?

It’s important too, to understand the difference between Troublemakers and Rebels. Harvey Schachter, in his article How to be a rebel, but not a troublemaker, at work published in The Globe and Mail, in February 2017 provides a quick checklist to identify Troublemaker s vs. Rebels:

I love Criss Jami’s quote about rebellion that says:

“If you have to say or do something controversial, aim so that people will hate that they love it and not love that they hate it.”
― Criss Jami, Killosophy

It’s interesting to note that there’s also a life cycle to rebellion. Leaders should be mindful of it. Dr. Carl E Pickhardt, Ph.D. highlights the cycle of rebellion in an article he wrote in Psychology Today, in December 2009 about Teenage rebellion. His article, Rebel with a Cause: Rebellion in Adolescence, reminds us that teenage rebellion has a cause. In my view, rebellion is an integral part of growth, not just for teenagers, but also for professionals and corporations.

Current evidence points to a global organization called Corporate Rebels: https://corporate-rebels.com whose sole purpose is to use productive rebellion to enliven uninspiring workplaces characterized by inertia, bureaucracy, and a lack of employee engagement. 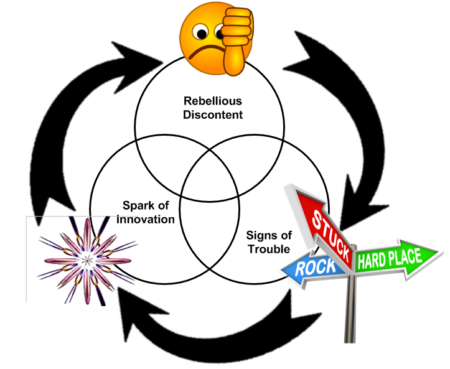 Dr. Pickhardt says that managing rebellion means taking on risks and responsibilities. Risks and responsibilities exist for both the rebel and the leader working with him or her. Rebels themselves run the risk of facing backlash, dismissive or shunning behaviors from peers, or worse, official reprimands from superiors or other leaders in the organization. Leaders managing rebellious staff members run the risk of squelching ideas and innovation, dragging morale into dissension and causing unnecessary organizational or operational churn. Essential interpersonal relationship and leadership skills such as: Collaboration, Facilitation, Negotiation, Active Listening, Giving and Receiving Constructive Feedback, Clarifying Expectations and Resolving Conflicts all play an important part in keeping lines of communication open and rebellious tendencies productive.

The first sounds of rebellious discontent are grievances and complaints in the operating environment. Leaders must be careful to ensure grievances are not ignored. Listening provides the psychological air for people to vent. Venting is often filled with real frustration and valid concerns. The challenge, as a leader, is to turn organizational angst into productive problem-solving consistently.

If you unknowingly pass Stage 1 of rebellious discontent, symptoms of trouble begin to appear. In Stage 2, grievances graduate to fully fleshed-out demonstrations, or formal protests by a group, or between opposing groups. The concern in Stage 2, for leaders, is that the discovery initiated to derive and consider the root causes of discontent can become emotionally and operationally disruptive and destructive. The guidance is to tread lightly with disgruntled colleagues and coworkers and to lead with your heart and humanity first.

The effort a leader makes to keep talking and to keep working through the discontent and frustration of peers, colleagues and subordinates, leads to a greenfield of opportunity. A leader’s strong focus on facilitation and collaboration can turn salty conversations into problem-solving, solution-building working sessions. In a recent start-up boot camp I attended, I heard the expression “fall in love with your problems and not so much with the solutions.” I translated and internalized this message into “stay with the discontent long enough to find the foundation of the future.”

The 3rd Stage of rebellion lights a spark.  The spark is that event, the conversation and the “aha moment” that channels rebellion into rebirth. The refrains and actions of starting anew, and starting again fuel the fire of rebellion that converts into the steam that drives the effort forward. It is through working through discontent and struggling with challenges, that our desire to break through is fueled.

Joel Mokyr, a professor of economics and history at Northwestern University, who’s written a wide variety of white papers and books on growth, innovation, and technological advancements, wrote a White Paper in 1997 called Invention and Rebellion: Why do Innovations Occur at all? An evolutionary approach. A couple of his thoughts rang loud to me:

“unforeseeable mutations (changes) always can and do occur to destabilize an existing state.”
and
“the key to success (in innovation) is to strike a compromise between excessive conservatism and excessive malleability.”

When working through the cycle of rebellion, it’s important to realize change is always happening. Voices of rebellion can be seen as calls to action, and point to areas of focus for changes necessary to advance and grow.

Rebels have a cause and a purpose. Work to recognize them. 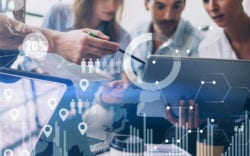